An Interview with Laguna of Tax Badger, LLC # 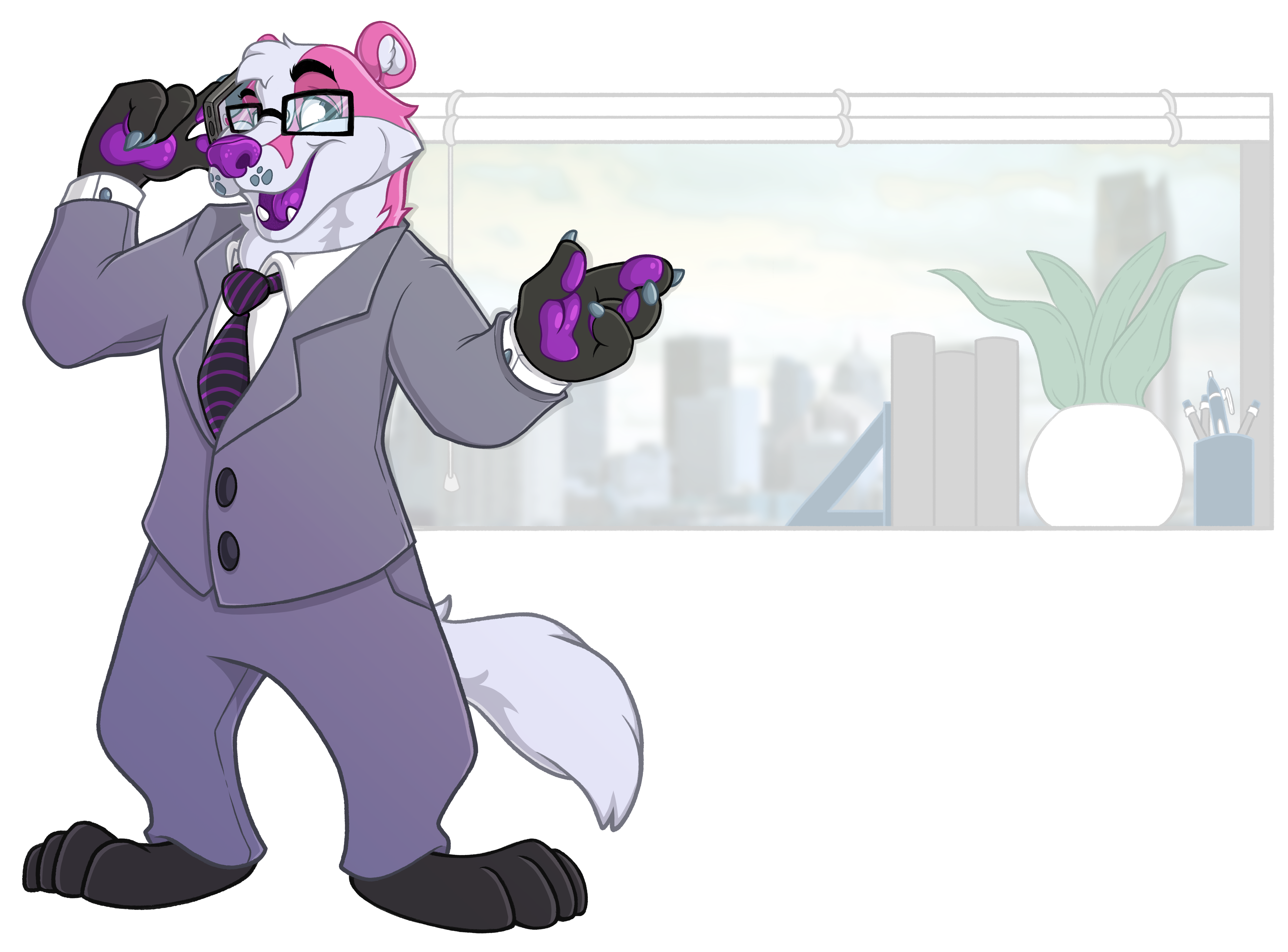 Laguna Crale is a bright pink Tax Badger that has made a name for himself with Tax Badger, LLC where he has made waves in the furry artist and NSFW content creator communities for being open and accepting of these professions. He’s freely given helpful pointers on his Twitter, @TaxBadgerLLC to help those questioning how to handle transitioning from making content as a hobby to making it a real, legal self-employment career. He’s also an economics major, kinky married gay man, and outspoken about the state of democracy in the United States.

Thank you for taking the time for this interview Laguna. How would you describe yourself? What are you passionate about and why?

Opening with the hard questions! I’m Laguna, the Tax Badger. I’ve been a furry since I was 13, and the community means more to me than I can describe. I’m here to help people! Especially the people who don’t know where else to turn.

Do you turn away clients if you think the NSFW content they make is harmful? It depends – I would turn away clients whose content is explicitly illegal. But for some clients, who are able to make that distinction between fiction and reality, they still need help with taxes. Pedophilia and bestiality are firmly in the illegal camp, though.

Is it difficult to keep up with the constant changes to how taxes work over the last few years?

That’s been one of the easier parts of the job, actually! Research has always been a strong suite of mine, so the tax law changes have been just a part of my tax upkeep. I’m actually going to be a little disappointed in the coming years when the changes slow down!

What is your take on OnlyFans recent choice to shoot itself in the foot à la Tumblr?

(This interview was presented prior to the reversal, and answered afterwards.) I view it as an inherent problem with capitalism, and especially the concentration of wealth that laissez-faire capitalism promotes. OnlyFans, like any business, needs financial security. Those offering financial security get to decide what goes and what doesn’t – for example, PayPal doesn’t allow sales of adult goods and services. Capitalism has decided that ‘adult’ is bad, even though it’s a part of everyone’s lives. There’s no room for other parties to disagree, due to the concentration of wealth; meaning that as a society, we are at a disadvantage seeking to change what’s taboo.

While I do think another payment platform is going to be critical in correcting the foundational issues, I don’t think that cryptocurrency is the correct venue.

Transparency! Any ‘Large business’ platform that fails at transparency will be less likely to explore options that retain their NSFW creators when finances become an issue. A more transparent business will be more receptive to its userbase, and act accordingly.

What are the tax implications of NFTs? Is there anything artists should know before using them?

Oh God. I… haven’t thought about this, haha.

So, there are two answers, depending on the results of IP laws coming to a conclusion on NFTs. The first, if NFTs are considered a purchase of IP, is that you would recognize the gains and losses on NFTs on 8949, much like cryptocurrency or stocks. (It would functionally be identical to the purchase and sale of collectibles, like prototype Super Mario cartridges). In this case, a short term sale would be taxed as ordinary income, and long term sales (holding the NFT for more than a year) would get the advantaged Capital Gains rate.

The other answer is that NFTs are not a purchase of IP, in which case you’re buying and selling… money. To the extent that, you do not recognize the loss (since you didn’t lose anything) but you DO recognize the gains (as you were paid for a thing), which would report on 1040 Schedule 1 line 8 other income, and be taxed as ordinary income.

Tl;dr don’t buy NFTs what are you doing

Do you think there’s a best choice among Patreon, Buy Me a Coffee, Ko-fi, etc.?

Social Economies of Scale! The best choice is the platforms that the most people use. I know a lot of people don’t like FurAffinity, but that’s also why you can’t get rid of FurAffinity – there isn’t a userbase elsewhere that gets you the publicity and ease of market access. (I guess there’s inkbunny, but… it’s better to not, haha).

The furry artists seems to be all over the place for what they charge, what do you think is the best way for an artist to gauge how much they should charge for a given piece?

I’ve discussed this before! I think that determining your buyout length is the greatest metric; you should be looking to sell out of slots in more than an hour, and less than 24. If you’re selling out in less than an hour, you can raise your prices – you have enough demand that while some people will no longer be able to afford your art, you still have clients who will fill your slots. If you’re over 24 hours, though, you may not have the fandom awareness for those prices; consider running a sale until you’re seeing those slots fill up at a pace you’re happy with!

Do you think artists should ask for tax on top of the sale price or is the norm of it being included already too strong?

I think incorporating tax into the price is simply more consumer friendly. The price on the box is the price you pay! Do note that commissions are not subject to sales tax in most states, so the only tax to be charged is income tax.

What do you think government could do better to help support the self employed and gig workers during the pandemic?

Controversial hot take: I think they’re handling self-employed/gig workers just fine? Perhaps better oversight in the Small Business Loans to make sure the firms that needed the resources were more easily able to get it, and better oversight for what determines a contractor and an employee.

I’ve seen some online vendors implementing Purchasing Power Parity (PPP)(1), where the price will change depending on the purchasing power of country where you’re buying from. What do you think about this: is it good or bad?

What are your thoughts on Universal Basic Income (UBI)?

Should minimum wage be increased? Should it be equal everywhere, tied to the cost of living, or something else?

That depends on the implementation of UBI. If there is UBI, I don’t think the minimum wage is necessary. If there ISN’T UBI, then our minimum wage definitely needs to increase. I also would like to see an income cap (a 100% tax bracket).

There’s recently been talk about the power of Big Tech in the US. Some of this has resulted in scrutiny over how these business just buy all competition, mostly startups, that have any innovative ideas. Should the motivation for startup founders to innovate so they can get big enough to get the big bought-out paycheck worth more or less to society than having the smaller businesses offering competition?

I have to laugh that I already touched on this, haha. Unfortunately, in our society, getting bought out IS the innovation pathway; innovation alone won’t be able to offer competition to the entrenched powers of the market.

What’s the most important skill that you’ve taught yourself?

How to communicate. I have mild autism, so communication has always been difficult. I still have difficulty reading an interaction, and I still say the wrong things (it’s why you’ll hear me stutter and go ‘um’ a hundred times in a single conversation), but I don’t think that I’d be where I’m at if I hadn’t developed any communication skills.

Is there any skill that you spent too much time developing that you wish you hadn’t?

There isn’t – regret doesn’t help anyone! Everything I’ve learned, everything I’ve done, good or bad, has made me the badger I am today. Whether that’s from improving myself, or learning what I shouldn’t do in the future, if I hadn’t done the thing in question, I wouldn’t have that information now.

What’s the biggest ‘Oh Shit’ moment you’ve ever had, be it one you caught in time or not?

My keyboard at H&R block was sticking, so I accidentally reported someone’s real estate tax paid with an extra 0. The state kindly told them that was wrong, and updated the number for the client. I’ve made sure to not repeat that!

What do you do for fun? Any books, movies, TV shows, etc. that you’d recommend?

“You miss 100% of the shots you don’t take.” Reach out and ask, try, before dismissing it. Even if you’re certain it’s a 1% chance of happening… You might get that 1 if you try. It’s impossible if you don’t.

“Don’t go to sleep angry.” The idea behind this piece of advice is to resolve issues so that nobody’s left to stew… but tackling the issue with a fogged head is a very easy to make the situation worse, or prevent its resolution. Go take a nap and look at it without the emotional distress!

Do you have any obscure hobbies?

I think being a badger on the internet would have to be the most obscure interest I have. 😉

What hobby do you want to get into but haven’t had a chance to dive into yet?

Miniature painting. I’ve painted a couple, but when I had just gotten all the resources to really start painting as a hobby, Tax Badger took off and I had no time!