This chapter is very much a work in progress, and is really more of just a list of topics, despite how much content there appears to be. I’d really like to have code examples under each concept as well, as otherwise it’s like reading a fucking math textbook from hell.In the meantime, please see https://sebastianraschka.com/blog/2021/dl-course.html#l01-introduction-to-deep-learning for a good intro to Deep Learning

What is the difference between ML and AI? [TODO]

Learning is not the same as memorization, for example, if a baby sees his mother from various angles and under different lighting, he’s not memorizing her face. He’s learning features about it, which is why he can still recognize her in new views. Checking if two things are identical (or nearly so) is much easier, learning features and detecting things based on them is more difficult for a computer.

When to use ML?

when not to use ML?

Before I try to poorly explain something that has been explained much better than I can via text, I recommend watching this 4-video series from 3Blue1Brown, it totals just a hair over an hour.

With 3B1B’s videos done, I think it’s useful to just be exposed to some terms in bulk and get a sort of high level overview of what’s going on. For that, I recommend just putting this video on 2x speed and digesting it as best you can. Don’t worry if something makes you go, “huh?” for now:

Given labeled examples with features described, like pictures of trucks and cars, labeled ’truck’ or ‘car’ and data fields for wheel count, color, etc. that are populated, the machine learning algorithm makes a model that will try to classify new inputs.

Let C be the target function to be learned. Think of C as a function that takes the input example and outputs a label. The goal is to, given a training set $ \chi = {(x^t,y^t) }^N_{t=1}$ where $y^t=C(x^t)$, output a hypothesis h ∈H, that approximates C when classifying new input.

Each instance x represents a vector of features (attributes). For example, let each $x=(x_1,x_2)$ be a vector describing attributes of a guitar; $x_1 = \text{sting count}, x_2=\text{acoustic or electric}$, each label is binary (positive/negative, yes/no, 1/0, etc.) and contributes to whether or not it’s a 6-string acoustic guitar.

a mix of some labeled data, and some unlabed.

Pretrain to get relevant features

transfer-learning, take training from one task and apply it to another (should this be here?)

agent takes step, looks at environment, makes actions based on it, repeat. Goal it to maximize expected long term reward

Not overfitting - spikey vs smooth curve. Spikey to directly fit is bad, similar with XY blobs with reaching out arms balance with model complexity with regulizer. We want generalization (learning) not memorization

[TODO] tie back to https://en.wikipedia.org/wiki/Linear_regression

b can be represented as \(w_0\) instead, as is shown in the above

not all functions are linearly separable, one straight line can’t split the data into positives and negatives- so having networks of units works around this

Of course, we’d like to be able to use inputs that aren’t just numbers. Representing things like price or weight can be given a number, but for other things, like colors, one hot vectors are helpful, for example, if there are three color options, red, green, blue, red could be [1,0,0], green [0,1,0], blue [0,0,1]. This is better than just assigning each color an integer (red=1,green=2,blue=3, etc.) because we don’t want to imply ordering in the data. One hot vectors are especially nice because they let us assign positive weights to a given color and negative weights to others. For example, in identifying a fire truck, red will obviously have a very positive weight, while being the other colors may be a negative weight.

\(x_j^t\) is the jth attribute of training instance t

\(y^t\) is the label of training instance t

It’s best to adjust the learning rate per schedule (iteration) rather than just use a constant. For this, we want to start with a high learning rate, then decrease it.

writing this as I take notes, it’s basically meaningless at the moment

No single linear threshold unit can describe this

Every one side of these is a halfspace, but given two functions, we can get an overlap, the intersection of the two halfspaces

now, we can find $z_i$ , mapping though a non-linear function, from x space to z space, now the problem is linearly separable- there’s no need for the dimensions from mapping from x-to-z space to be the same, and there can be multiple hidden layers

generally, if the input can be split up with straight lines and be defined as the unions and intersections of those halfspaces, then two hidden layers and an output layer must exist that works

First, feed forward the network’s inputs to its outputs, then propagates back error with by repeatedly applying the chain rule

propagate error back in order to compute loss gradient with respect to each weight, then update the wights

don’t have to update the loss on each instance, could do mini-batches (Stochastic Gradient Descent- SGD), or in the extreme case, have the entire training set be a single batch (batch gradient descent). SGD saves on memory, which helps.

(note the library- tensor flow, pytorch, etc.- will probably handle this for you)

given a complicated function, we want to know its partial derivatives with respect to its parameters

Logistic - has issues with saturation

How many layers to use? #

performance improvement even without more parameters

Gotta know when to add more layers instead of parameters, but in general adding more layers is better, that is try adding layers before widening, keeping in mind the overfitting problem. Also, increases training time

Silicon ’neurons’ are much faster, but connect to many fewer nodes, compared

much different for ML vs Biological Modeling

think a ton of really weak cores, which explains the GPU usage

good for raw sensor data, okay with noise, but requires long training times and lacks human readability- hard to know why it predicts what it does

Started with the Perceptron algorithm, but that was too limited (40’s)

multi-layer backpropagation (80’s) allowed for training multi layer networks, and they couldn’t be made deep on that era’s hardware, while other algorithms (Support Vector Machines, boosting) were taking off instead. In the 2000s it became possible for 5-8 layers though, making ‘deep’ learning possible (mostly because of gaming GPUs). Better datasets, and better algorithms, helped too.

Any boolean function can be represented with 2 layers

that goes to any function at 3 layers

but, this is only true for existence. It may be very, very difficult to find the weights and take a ton of nodes

We used to initialize parameters to random numbers near 0, but now Glorot is used,

Good for data with grid/array like topology, think images or time series data

based on using convolutions and pooling- extract features, invariant to transforms, parameter efficient

passing a kernel over an image, just doing a sliding window, like normal - can do edge detection, blurring, etc.

Kernels are just weights, so, we can learn the best weight to use

not complete connectivity, that is no crossing from layer to another, the layer above only depends on one path

… unless we use a convolutional stack(?)

… next node over probably shares many parameters (weight sharing), the computation graph could just share this overlap to reduce parameters. Saves memory

​ weight sharing forces the layer to learn a specific feature extractor. Multiple layers could be learned in parallel, as only detecting one feature (like vertical lines) may not be helpful.

​ on images this is commonly done as separate detectors on color channels and multiple for specific feasters. Each higher layer is for a more complex feature, with multiple channels of features.

can pad to retain size, 0-padding is common

can use a stride-parameter to downsample

Downsides of CNNs: Many parameters to tune, large memory usage

Object Detection can look for local areas of interest:

ML is basically an optimization problem

We need a function to measure performance - a loss function

But, it’s more important that the model generalizes, so given a new example (picked i.i.d) according to unknown probability distribution D, we want to minimize h’s expected loss $error_D(h)=\mathbb{E}_{x\sim{D}}[J(y_x,\hat{y}_x)]$

By doing to good on the training set, the over fitting will make results pretty bad. That is a specific parameter h overfits the training data, X, if there is an alternative hypothesis, $h^\prime$ such that $error_x(h) < error_x(h^{\prime})$ and $error_D(h) > error_D(h^{\prime})$

This is literally just the formal defn’ of overfitting. Don’t over think it. 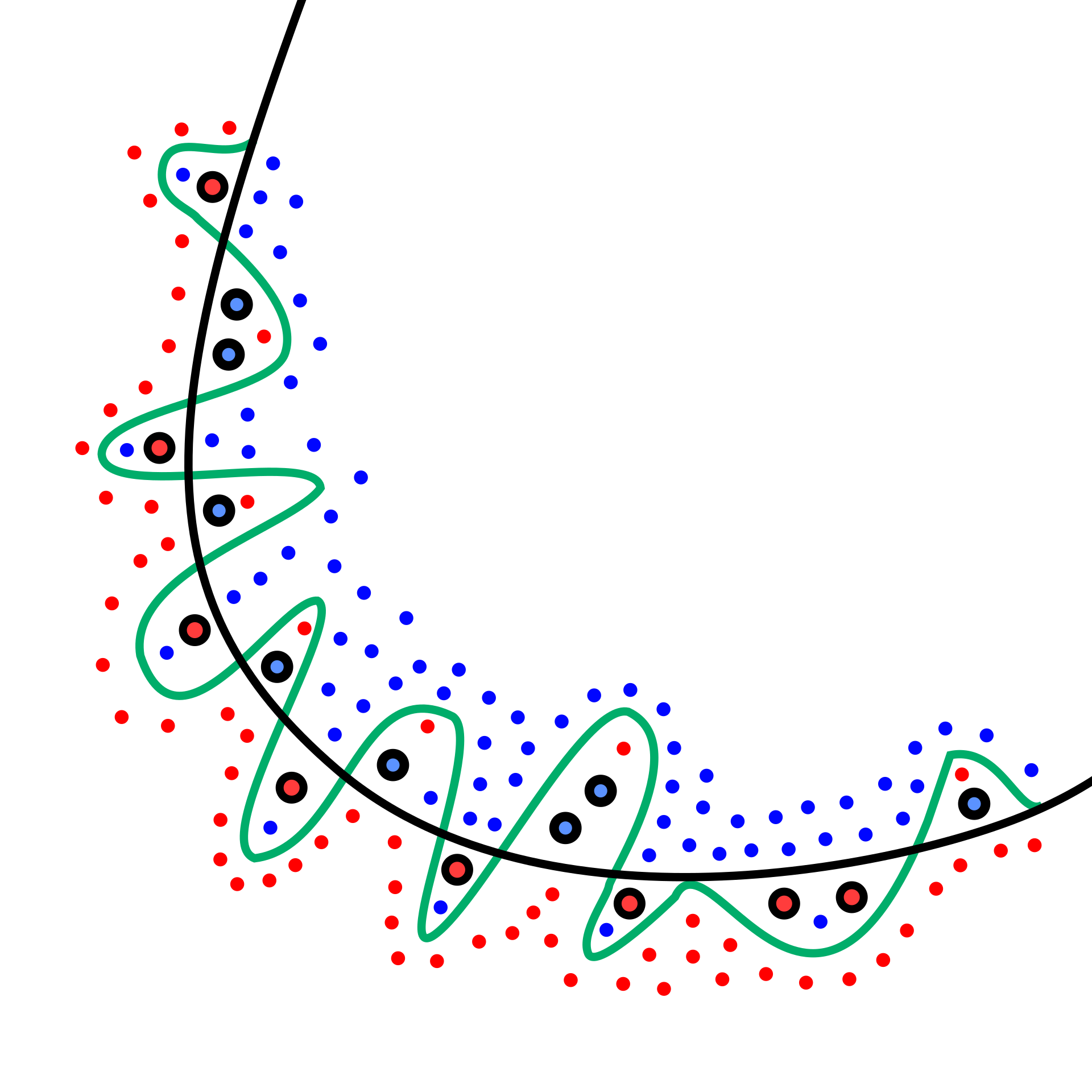 Note that underfitting is just as much of a problem. Training accuracy needs to be balanced with simplicity.

Overfitting is often a result of an overkill network topology, training too long, not having enough training data, or not doing early stopping.

as weights deviate from 0, activation functions become more nonlinear, which brings a higher risk of overfitting

danger of stopping too soon, as it might just have a ‘bump’

I’ve tried to divide these into academic and artistic, but there is a ton of overlap. I reccomend looking at everything here though!

Stan, a platform for statistical modeling

Darknet - an open source neural network framework written in C and CUDA, with lots of examples