This chapter of OpGuides will be mostly C, but, why? Well, there’s only really a few options for learning low level programming that make sense to start with. C, C++, Rust are the ‘big three’ that come to mind for me. C is awesome. It’s spec is small, it’s been kept minimal, and it’s got a ton of tools to help you learn. It forces you to know the low level, which in this case is great. C++ has grown into behemoth where any thing can be done in about a dozen different ways and each development team is effectively writing in their own dialect of C++.

On the other hand, C has a lot of annoyances due to its minimalism. For example, there are no strings - only arrays of characters - and all memory management is manual.

Rust is cool, but I think it’s more of a language you need to grow into understand why someone would want to use it. It’s very rigid and does a very good job of preventing memory mistakes and making sure the programmer has handled any errors that could come their way (What do you do if you go to open a file and it’s not there, for example).

Thankfully, C++ and C are pretty similar, as C++ is a superset of C - that is it’s C with a whole wack ton of added features (for better or worse)

What this really means is that should you need the added features of C++ the syntax should be at least familiar. Keep in mind though they are different languages. C++ has features that you absolutely should use if you’re writing in it. Strings, abstracting out much of the memory management, ‘vectors’, etc.

It’s also worth considering that you can use C code in C++ projects if you need.

Don’t throw out everything you already know! #

Some simple programs, in C #

[TODO] use TCC instead of GCC, to enable live reload https://bellard.org/tcc/

It’s traditional to start in any language by writing a program that just outputs the words “Hello World!” to the terminal, so let’s start there in C++

To run this code, save it to a file named hello.cpp and then open a terminal, navigate to that folder and run gcc hello.cpp -o hello, then you can run your program with ./hello, that should give you something like this:

Alright, so let’s go though line by line.

On line 1 there’s a #include statement, this tells the compiler we want to include some library or other code. In this case we want the stdio library, as well need it in a few lines, but what about this library, where is it?

Well, that library is just some other code. We can look at it by navigating to /usr/include/stdio.hor, in VSCode you can hold control and click on the word stdio to go it’s file, so let’s look at that file:

okay, so it starts with a big copyright block in comments - in C // makes a single ling comment and /* comment */ are for multi-line comments - then on lines 39 and 40 we can see it is in turn including three more files such as stddef.h on line 33.

But lets look deeper, down on line 332 of stdio.h we can see printf() is loaded as an external function. The extern keyword marks this as a sort of indicator to the compiler, gcc in this case, that this function definition is actually implemented elsewhere, but that this is the signature to expect from it’s usage. That is, when anything that imports stdio.h uses printf() it should expect to return an integer (the int before the word printf) and take in a pointer to a character array (the char * inside the parentheses)

So, where’s the code for printf() that does the actual printing?

Well, in it’s part of libc. libc is the C standard library on linux, typically it’s glibc in particular. This is a pre-compiled shared library so that when any program needs to use printf() it can just call the printf implementation from libc, which is stored in /usr/lib/libc.so.6

We could go looking into the source code for this, but I think it’s sufficient to say that it’s simply loaded from a shared system library.

Another thing you should notice is the #ifndef at the start of this file, which starts with a #, just like define.

These are pre-processor directives, just like #include is, basically, it’s special code that the compiler (in our case gcc) looks at before it complies the code. Of note there are #if and #else blocks, you might see these used for checking if a certain library is available for example, as a way to check what compiler is being used to adjust things slightly, or to check what OS the code is even being compiled for.

This little adventure was mostly just to show you that these #include statements that use system libraries are not magic, and to point out that most code will end up loading shared system libraries (.so files on Linux, .dll files on Windows)

Okay, so, that’s done. Line 2 of our 6 line hello.c is just ‘white space’ or a blank line, so we can skip it. Line 3 is where things get interesting again, with int main() {. The main() function is special, as without doing something weird, it’s where your code starts from. you may often see this line as int main(int *argc*, char const **argv*[]) too, which I’ll get to in a bit.

So, lets break this down, starting with int.

so, with int main() { we’re saying the main() function will return an integer. skipping ahead a bit, we can see this is the case, as on line 5, return(0) it does exactly that, but, why?

Let’s run our code as is (./hello), then change this return code to return(2);, recompile with gcc hello.cpp -o hello and run ./hello again.

See that little 2 ↵ in my terminal? That’s the return code, but why did it get printed?

Well, when the program exits, it returns that number to the process that called it (In this case the shell - read up on shell vs terminal in Appendix A1) and if this number is anything but 0 the shell prints it, because anything but 0 is assumed to be an error condition, and that this number may indicate what that error was. So, if we know getting to that return(0) signifies that our program ran correctly, we should, in fact, return 0. 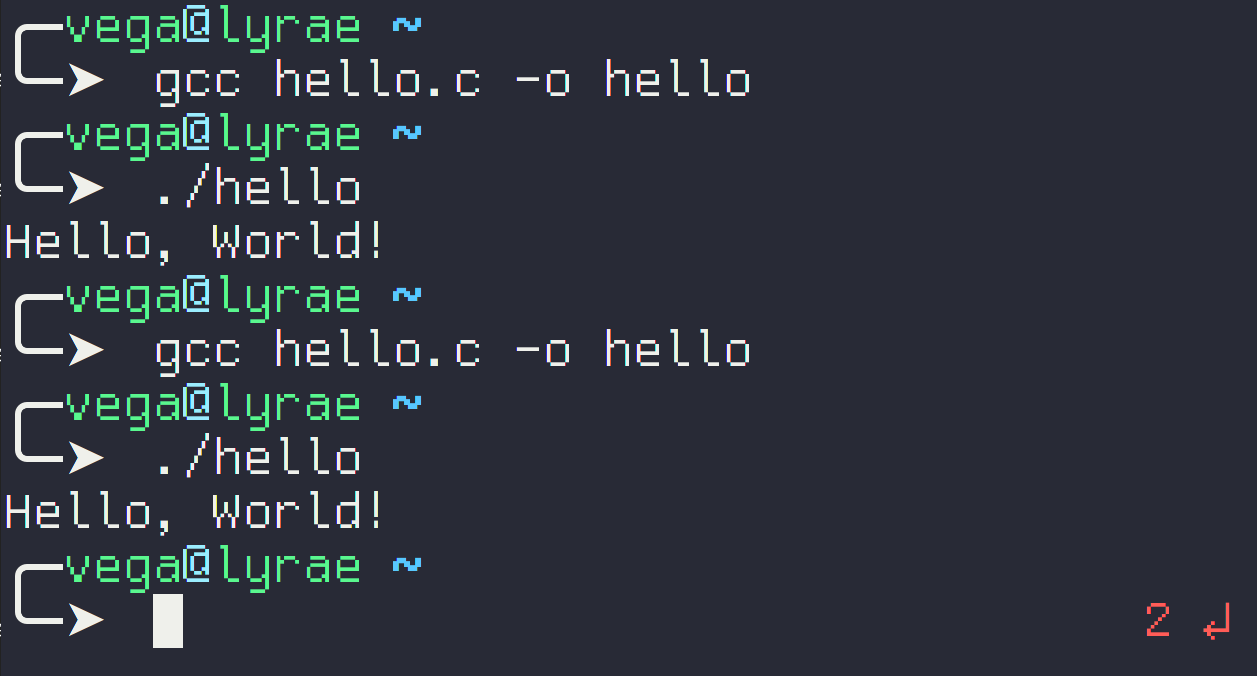 Okay, So, other than the closing curly brace (}) on line 6 that defines the end of main, with

We only have one line left to look at, and that’s line 4, which is

Okay, breaking it up, we first see that we’re using printf() the function whose definition we imported from stdio.h and which is actually being executed from a linked system library stored in /usr/lib/libc.so.6

Okay, so, we now have almost everything, last up is just the string that we’re printing to the terminal, which is "Hello World!\n"

But what’s with that \n on the end? Well, to understand this line we’ll need our helpful friend, the ASCII table.

ASCII is a really old way for computers to represent text. In most modern systems it’s been replaced by unicode (which is what let’s you use emjois 🤔) but the start of the the much larger character space of Unicode is the same as the ASCII table anyway. Alright, so, you’ll notice some really weird characters in the ASCII table, not just the normal symbols you’d expect. The one I’d like to mention now though is at 0xA - [LINE FEED]

Line Feed, as well as some others like Bell and Carriage Return all date back to when computers were hooked up to Teletype machines - which were basically a mix of printer with a typewriter, so, naturally, there had to be some control characters to do things like tell the machine to move to the next line.

Because we like backwards comparability so very much, we still use these same codes for modern terminals, so typing \n at the end of a line is really saying “put a line feed control code here” which, to a modern system, means go to the next line.

The reason we do this is because without it, the output of our program looks like this (ran first as is, then with the \n removed)

see how it doesn’t leave room for the prompt to be printed on a new line of it’s own!

The ASCII table has some other interesting side effects too. See how a capital ‘A’ has an ‘index’ 32 higher than a lower case ‘a’, and the same for ‘B’ to ‘b’. Let’s use this to our advantage to make the ’d’ in ‘Hello World!" uppercase.

I very, very much so recommend getting a feel for writing assembly with the TIS-100 game. It’s $7 on steam (at the time of writing).

[TODO] Interacting with the above, this program should run in the background and update the data, based on window focus events using libxdo

This program should actually provide the VAST majority of the source code, with purposeful errors for demonstating the below

furthermore, the C code should check to see if there is a new article, and if so it should call a function that first checks a ‘meta’ entry to see if the python code to change a published time to be newer or the number of entries has changed to optimize:

however, every time this will still need checked to monitor the md for changes, using ionotify

So, by now you’ve written a fair amount of code, and I’m sure you’ve figured out that a bunch of tiny issues can get really annoying. Maybe you keep forgetting semicolons, maybe you wrote ‘=’ instead of ‘==’ when doing an equality check, whatever. Turns out, there’s an easier way to catch these kind of errors and it’s available for most languages. Allow me to introduce you to…

Yeah, it’s literally named after the fluff you’d find in your hoodie pockets, but, it’s still a super necessary tool. A ‘Linter’ is a static analysis tool, basically it makes sure you’re code is good before you run it. There’s a whole bunch of linters out there. As a pretty stupid example, lets look at this python:

Here’s our stupid simple example, here we want a program to show us the output of sin(1…10)

If we run this code anyway, we’ll see python print:

This code intentionally has a few issues stopping it from running, thankfully the Linter, in my case VSCode’s Pylance, found them both:

Here, it’s saying on Line 5, character 9, (where the word math starts) I have no function named math. Furthermore, on the same line, but character 18, the variable x is not defined. Running the program did already tell us that we didn’t have math defined, but this caught that x was undefined too. Let’s fix up the code, and add some print debugging while we’re at it.

now running our code yields this:

But, remember I said we want sine(1…10)? The linter no longer has any problems listed, so what’s up? Well, that’s a limit of static analysis, it can only find errors that occur statically and it’s not able to read your mind. Here, the issue is that python’s range() function is inclusive of the first number, and not the second, so it should be range(1,11) to work correctly.

So, what can and can’t static analysis do (with some exceptions depending on language and linter):

STATIC ANALYSIS CAN NOT:

[TODO], Clang Tidy, and using it in VSCode 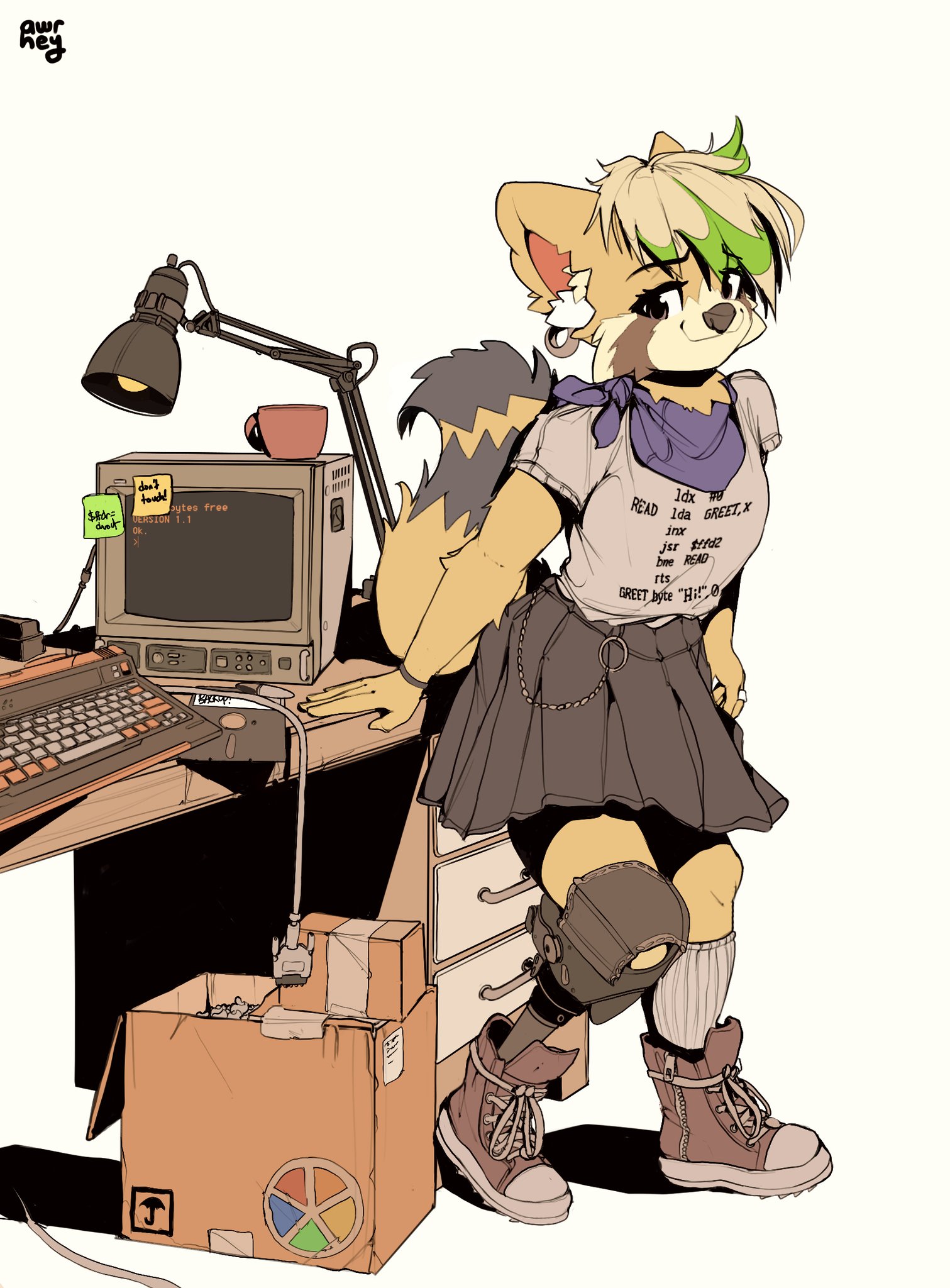 Where to get more practice with low level programming #

The NES has 2048 bytes of RAM. I snapshotted the RAM at each frame (60 fps) during 5 seconds of gameplay and plotted time series of the ones that changed at least once. pic.twitter.com/rtPT0mHiLD

Why mmap is faster than system calls (Alexandra Fedorova)

Computer Science from the Bottom Up