Seeing Theory: A visual Introduction to probability and statistics

Why, where are these used, etc.

For the following I’ll be using a dice roll example, where the events are the total of two die. The Sample Space of this is

Note, that 1 isn’t possible as the lowest is both die being ‘1’.

Let’s look at the probability of these outcomes,

While there are 11 (2-12) unique outcomes, there are 36 possible outcomes from the two die, which are shown in the table above.

If you follow the diagonal you can see that there is only one way to get 2 or 12, two ways to get 3 or 11, and so on, this gives this table:

It’s worth noting, the phsical relationship is not always this clear. In a lot of situations, you’ll just need to do the math and determine if \(P[AB] = P[A]P[B]\) to check.

Sometimes, knowing something about one event tells us something about the probability of another event. This can be expressed mathematically. When written down, it looks a bit gross, but it’s actually really easy to understand:

Here, P[A|B] means, the probability of event A happening given event B has already happened.

So, looking at just one side of the above equation, we have \(P[A|B]P[B]=P[AB]\) , this reads as “The Probability of A given that B has happened times the Probability of B is equal to the probability of of an event that is in both A and B”

The other side of this equation, is just swapping the roles of A and B.

So, let’s go off the above example and assume that you’re really bad at showing up for work:

So shoving these values in to the above, we can determine that

Alright, but what about a more complicated situation, one wher you have to make multiple decesions! Let’s

Keeping the numbers simple here, lets say you want to know the probability that the ball you picked was from box1, given that you’ve already drawn a blue ball. This is where a Tree diagram comes in handy:

This diagram first helps us expose an assumption in the problem: that the initial choice is a 50/50, split chance between which box we start with. So our first choice is really which box are we picking from. Both have a probability of 1/2. Only then do we pick our ball. This stacking of situtations gives us the term ‘sub experiment’ where you perform each sub experiment in order: so our first sub experiment is picking the box, the second is picking the ball.

This lets us figure out the conditional probabilities super easily, as all that’s needed is to look at the respective branch. For example, in the above we can see P[Red|Box1] is 9/10. Another nice thing is by mulitplying across the branches we can get the probability of the entire ‘system’ easily. Note the ‘,’ instead of a ‘|’ in the diagram below. This is saying that these have both happened not implying conditional probability. That’s why adding all of these up will add up to 1 (100%) as it’s a look at all of the possible events.

[TODO] Why Bayes Rule is nicer with odds (YouTube, 3b1b)

Applying this, we can see that we get

Just to check outselves, what’s the chance that the box was Box2?

There are a few more things to note regarding conditional probability:

Looking at binary, arrangements of bits

with or without replacement

Original Image by Skbkekas - Own work, CC BY 3.0, link

Which of these one calls “the” geometric distribution is a matter of convention and convenience. 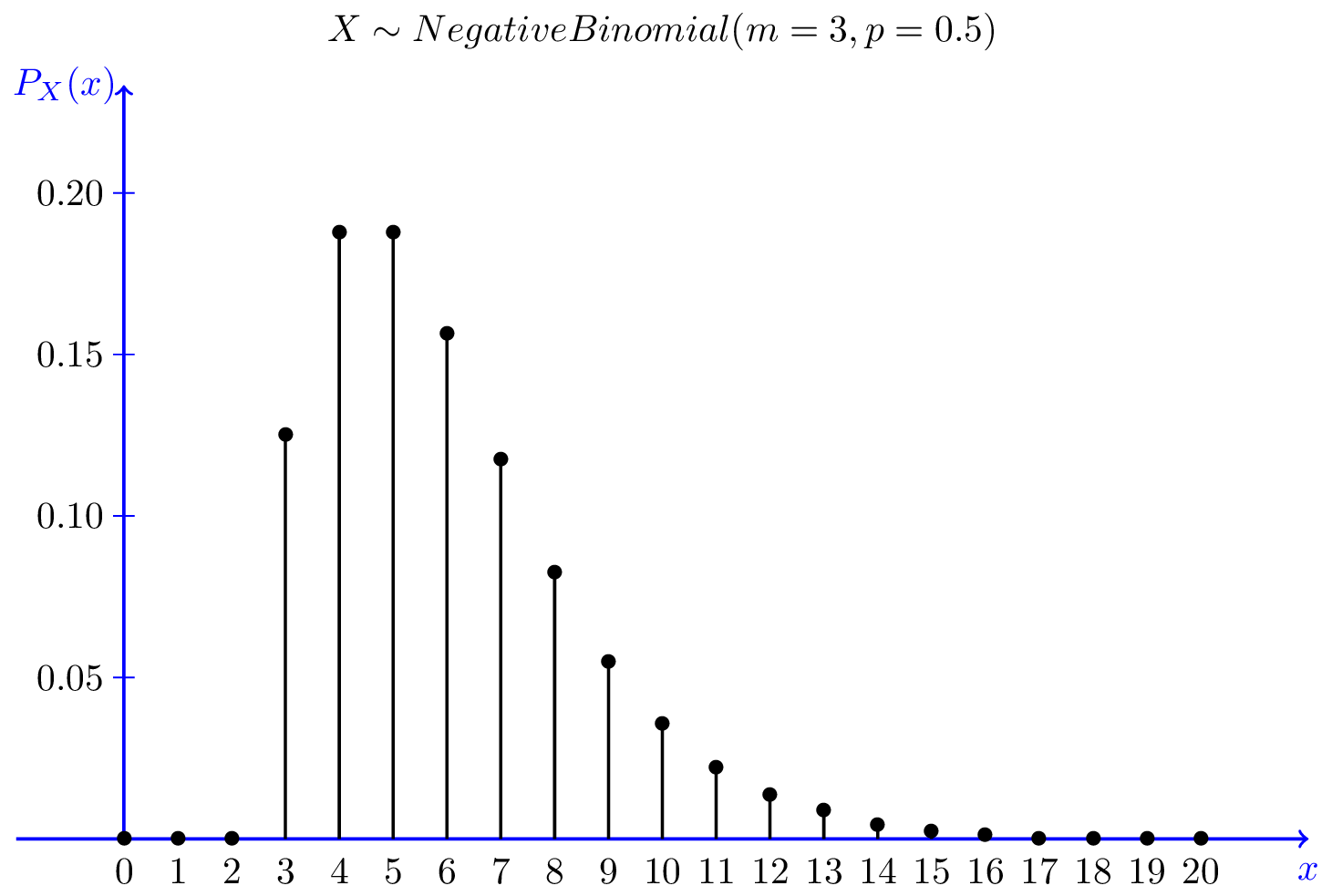 From Introduction to Probability by Hossein Pishro-Nik, CC BY-NC-ND 3.0 … technically I’m abusing the licence a bit, but the ‘derivative’ here is just a CSS invert, you can open the image in a new tab to see the ‘original’

Original Image by Skbkekas - Own work, CC BY 3.0, link

Probability of a number of events occuring in a fixed amount of time (or space, or whatever) provided the events happen with a constant average rate and the events are independent.

Cheatsheet and another one