This page will test your UTF-8 support and ability to load in weird fonts. It works on my computer ╮(─▽─)╭

This font is Fairfax HD by KreativeKorp, which is licensed under the open font license It is used for all of the conlang displays on this page. Some of the examples on this page are also copied directly from that page.

To not leave anyone feeling left out, LOTR also used Cirth, here’s a sample of that

or Dothraki* from Game of Thrones:

Translated: The stars are charging for you* Dothraki has its own writing system as well; however, from what I can tell there are no good fonts supporting it and I don’t want to embed an image for it.

Constructed languages or “conlangs” tend to come in many varieties, ranging from the very-pretty-but-nearly-useless, to the very-ugly-but-nearly-useless. From an artistic perspective - ignoring toki pona’s writing systems(1), just the actual sound and “vibe” of the words - toki pona is… middling? Like, it’s not the prettiest language when spoken aloud and the majority of the time people just use the Latin (“normal”) alphabet, so, why then am I devoting a page on my website to it?

Well, let me answer a question with a question: if you were making a language, what would you do? How many words would it have? What sounds would the language use? For context, English has - according to multiple Google results that are all very wrong for a huge variety of reasons - 171,146 words and 44 phonemes (that is, distinct sounds).

toki pona? ~140 words and 14 phonemes, all of which directly correspond to a letter. This means each letter always makes the same sound. This is actually a bit tough for an English speaker to get used to. More on that in a bit though.

Now I hear your eyebrows raising and your thoughts of “Wow, okay, that sounds totally useless”

Well, not really. Due to some clever grammar and the general flexibility of the language - letting some words be nouns, verbs, and adjectives depending on how they’re used - it’s generally quite easy to describe complex-ish thoughts with toki pona just by appending enough adjectives and using context.

But, okay, it’s a simple language. Still who cares? There’s been semi-popular intended-for-actual use languages before. Esperanto is a thing after all and has, uh, checks notes, 2 million? (I call 🐂💩) speakers. (2) Similarly, the internet briefly got on a Lojban kick, though far as I can tell it has somewhere around 20 actually fluent speakers.

Compare this to toki pona, which based on my own highly scientific definitely not pulled out of my ass estimate has roughly 600 fluent speakers.(3)

The thing is, I’ve been active on the discord and nearly every night there will be a group of people hanging out in the 🔊 toki pona taso (toki pona only) voice chat. So, there’s clearly people to talk to. Similarly, every time I’ve popped into any of the toki pona VRChat worlds, there’s always been people hanging out already.

But that’s a lot of words to say “This language is easy and at least some people speak it”, but I think misses the bigger point:

But while those things are cool I don’t think it quite conveys what I want to stress more than anything: the toki pona community is full of the brightest, most passionate, deeply quirky, esoteric, and just full of life people I have ever had the pleasure of hanging out with. Being in voice chat with them feels like I’m with my people. The community is full of nerds (in the endearing way) pushing the boundaries, and - being nerds pushing boundaries - , they’re directly influencing culture and making new technology. This can be as technically-mundane-but-still-really-cool as Minecraft’s built in toki pona support (!!!), 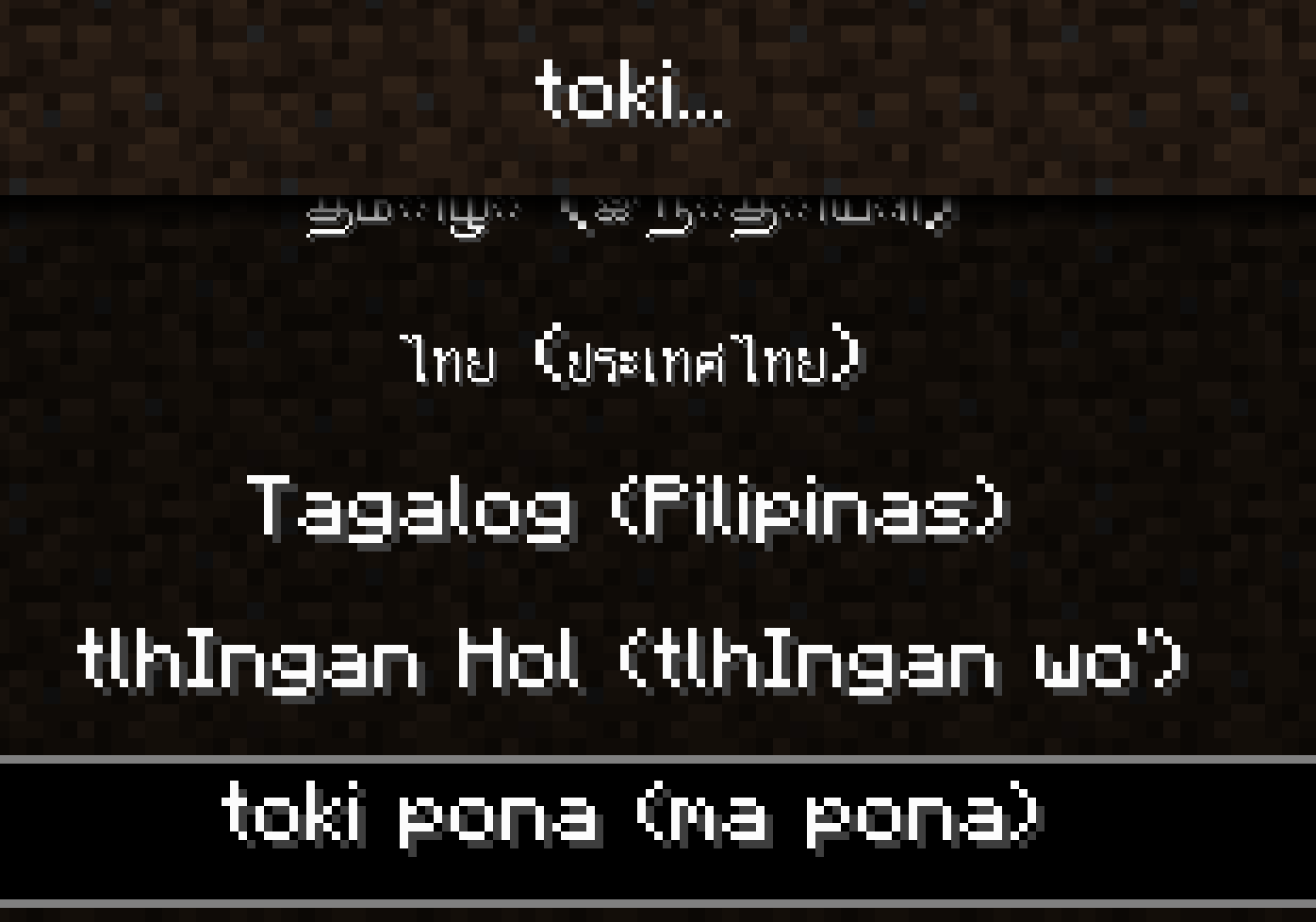 (Though, it also has Esperanto. Plus it has Pirate Speak and LOLCAT among a few other joke languages too.)

to as impressive as creating fonts (so, many, fonts. It’s nuts.) for a section of unicode unofficially reserved for conlangs and making custom, novel touch keyboards for input.

Ultimately, I love toki pona not for the language, but for the people.

Of course, most people aren’t willing to devote the time it takes to learn a language (even a simple one) just to hang out in a new community, so I do want to point out that you’re still getting some of the traditional benefits of learning a language. Sure, you won’t be able to speak to as many people as something like [Insert big language you don't know here] or get translator gigs (probably) but you will still gain that extra head space and new way to see the world that comes with a new language. If you’re like me (that is to say mono-lingual and low on time and motivation to learn a traditional language) then this is a good fit.

You can learn toki pona in a weekend!

And, like, okay, maybe you can memorize the 140-ish words that fast, but knowing words doesn’t mean you know a language. Plus, that’s a lot to memorize really quickly.

* from the perspective of someone who only knows English ** and who is still very much so a noob.

How to learn toki pona #

I can not possibly stress how much I am not the person to ask this, as - and I can’t repeat this enough - am a noob myself. However, I have read the shit out of intro materials and figured out the hard way how not to learn toki pona.

First things first, while everyone adores Sonja Lang for making toki pona, her original book on it (Amazon), is… meh?(4) The best guide I could find now is https://devurandom.xyz/tokipona/. If you want a video guide, that page does mention jan Misali’s 12 days of toki pona lesson series, but it doesn’t mention that it is currently being slowly remade and updated, so while incomplete, you can learn some from the new series, and of course the old videos are still there .

While going through that, having the one page toki pona cheat sheet v2, edited by jan Sa and released under CC0(!!!) has been a massive help for me when trying to parse out sentences or needing to ctrl+f a certain word. This dictionary is super nice too.

At least at first, your biggest problem will be vocabulary. The best way to learn the words is to use flash cards from AnkiWeb - a flashcard website. First, you’ll need the software though. Download it from https://apps.ankiweb.net and/or your phone’s app store (Mac/Win/Lin/iOS*/Android) (I really recommend mobile, as the full desktop interface is awkward for flash cards but the * is there because the iOS version is expensive)

Download the unofficial app from Google Play, open it.

Tap the plus button in the bottom → Get shared decks.

In the search bar, enter “toki pona” and select the top result “Toki Pona (with reverse and linja pona)”. Scroll down, hit download, it will ask if you want to download a file. Hit yes. The app should automatically try to open the file, though it may prompt you to actually open it with the AnkiDroid app, if it does, obviously select it as the app.

It’ll take a moment to import, after it does, you’ll see the new deck.

By default, the app is set to only show you 20 cards a day, which is why it looks like the 122 card deck you just downloaded only has 20. Long press the deck name, select “custom study”, and “study a random selection of cards” and just enter a really big number. You’re good to go.

╮(─▽─)╭ It’s $25, and while I don’t mind supporting devs, I don’t own any iOS devices and, frankly, that’s pretty steep. Unfortunately, the other big iOS app for toki pona flash cards is also littered with in-app purchases. The latter especially feels like a slimy money grab to me for software that can be shit out pretty quickly, so … use the desktop version of Anki I guess?

Download the desktop software, open it and set it up, then download this deck and drag and drop the .apkg file into the interface. The interface is awkward, but keyboard shortcuts are everywhere. Space to flip and then advance cards works quite well.

By default, the program is set to only show you 20 cards a day, which is why it looks like the 122 card deck you just downloaded only has 20. Noodle around the interface and you can set it up to make all the card available every day if you want. You can also set UI scaling if everything is tiny.

If you just dedicate yourself to the vocab and getting the grammar rules down for a few weeks, you’ll at least be able to read and write toki pona, even if you still sometimes need to look up words and not all your sentences are perfect.

Fortunately, the toki pona community is very welcoming and aware of the challenges in learning, and more than willing to check translations and that you conveyed what you intended.

The next big problem is speaking it. As mentioned before, the pronunciation is a bit odd if you only speak English. For this reason plus the generally fantastic vibes of the community, I recommend joining ma pona pi toki pona, the toki pona discord, right away. This will give you a chance to talk to people and ask about how to pronounce words. If you just need to hear a specific word, the toki pona appendix on Wiktionary has audio samples of every word… though some of them are sub-par at the time of writing.

Speaking of, there’s also https://wikipesija.org/, the toki pona Wikipedia clone, that has a fair amount of cool stuff on it.

toki pona is pretty neat, I guess you could even say it’s a good language (🥁 ba dum tss) but more than anything it’s a language of good people. The things these people are doing range from moving artistic expressions of art and music and poetry to technical achievements- like creating novel input methods, using otherwise unallocated unicode space, and even getting their language to be a part of Minecraft. I know it’s not something I want to miss out on.